Imagine waking up to find that the neighbours you have known all your life and even sat next to at school, now walk past you without stopping, now forbid their children from playing with yours, now spit at you and even attack you.
Imagine having nowhere to turn, that the walls are closing in and that there is no escape. Imagine that you have done nothing wrong, yet you are to be punished nonetheless and no one will stand by you.
On Holocaust Memorial Day – 27 January 2013, we’re asking you to remember and stand by those who were forced to live through these experiences. We want you to honour those communities which were destroyed in the Holocaust, under Nazi Persecution and in subsequent genocides in Cambodia, Rwanda, Bosnia and Darfur.
Yours in Christ. N
Posted by N Abram 1 comment: Links to this post 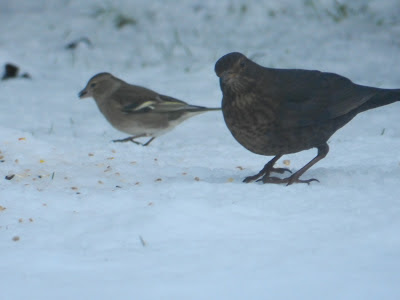 I thought that I'd share with you some pictures. More snow again today as about an inch according to my hubby fell last night. The birds love to come and pick at the seeds on the ground. I had a lazy morning, reading 1 Samuel: 12. After Saul is confirmed

as a King, Samuel addresses Israel. In my Scriptures Union notes, I read: In a blunt turn of phrase, 'Do not turn away after useless idols..can do you no good, nor can they rescue you'  v.  21.  In the past, I have pondered over this request and wondered why on earth they would have wanted a 'human' king instead of the Lord himself. I like to see that ' despite their sin, the Lord remains bound to this people 'for the sake of his great name'. What do you think of this request? Steve and I kept on watching the birds and I enjoyed tasting the cranberry jam he made back in November. I also read a bit more of Life together by Dietrich Bonhoeffer. I found the first chapter about community so revealing. I quote: Because God has already laid the only foundation of our fellowship, because God has bound us together in one body with other Christians in Jesus Christ, long before we entered into common life with them, we enter that common life not as demanders but as thankful recipients. Further on, he says: 'Even when sin and misunderstanding burdens the communal life, is not the sinning brother still a brother, with whom I, too stand under the Word of Christ.' Forgiveness is the key word. 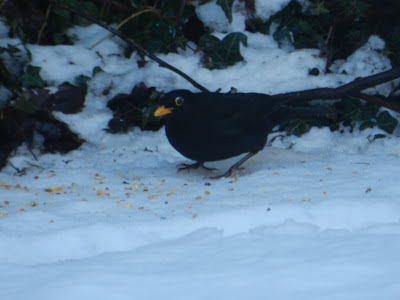 Later on we went to Stone and had a walk by the canal. Quite a few ducks were looking for food there and Steven took a photo of an unusual bird with a yellow back, however I have forgotten its name! How was your Saturday? Yours in Christ. 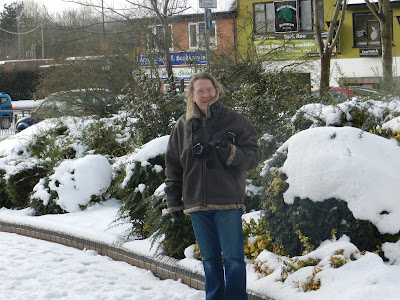 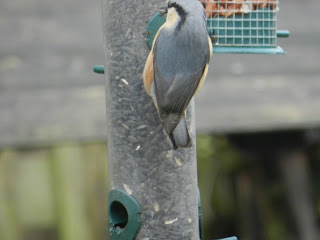 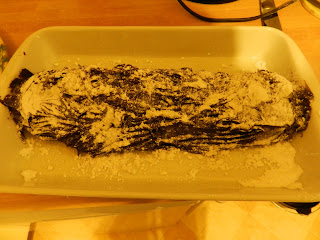 Hello to my blogger friends and welcome to you, new visitors.
As I haven't been able to hack into my hubby's computer wanting to 'borrow' his much nice photos of the nut-hatch, this is the only one decent I have. He is turning his back and as you surely know he is a  fast eater. This was shot on a Saturday just before Christmas.
I can get quite involved with things such as reading or even house chores and neglect others even if I like them. So over the Christmas holidays, I took a few photos and I never had time to save them on my computer, ready to be used for later.
Photos tell stories and the girls will tell you that I did not bake any cakes until after Christmas..my excuse, I had to finish buying presents and what started with a sneeze on the 22nd of Dec ended up as a bearable but tiring cold with the unavoidable aches..
So here is the traditional 'buche au chocolat et au café' or log, following my late mum's recipe with coffee and chocolate. My husband is not keen on it so I did try another recipe, and this one contained 'crème de marron' chestnut purée, Imo ate quite a bit but no one else was keen! We were also so blessed to have all the children over Christmas. 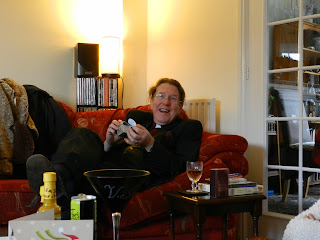 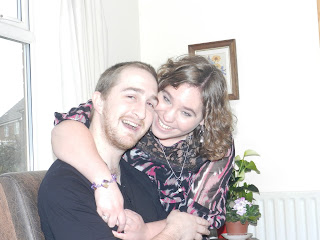 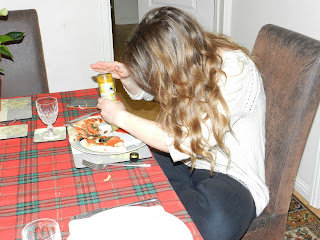 We attempted to a quick walk by the canal and I thought this horse looked so cute with his leopard cover! Finally, Mr Squirrel always comes and pries on the birds' seeds. I hope that you too can look back over the Season with joy. We are counting our blessings and praising the Lord for them. N. 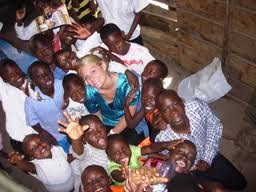 This week has gone so fast and it has been really nice.  As I am now working nearer home, I have more time to indulge in some reading before I tackle marking and planning in the evening. Over the years, I have become a fussy reader, call it choosy, I do not want to waste time to read rubbish, it goes the same with newspapers, magazines or blogs.
Another habit of mine is that if I like a book a lot, I will read and enjoy so much of it and then stop reading and keep it for later..I am not sure why I do that. Do you do that too? Could it be that I need to be reassured that come to the crunch, I have got something really good to enjoy!
Before Christmas, I read a beautiful book called Song of a Stranger that gives you interesting pointers on how you can be faithful to God in a non-Christian society without compromising your beliefs (I quote) and somehow I stopped before the last chapter, The Best is still to come.
Before the New Year, I ordered 2 books on amazon, Compelled by Love by Heidi Baker that I have nearly finished and Life Together by Dietrich Bonhoeffer that I cannot wait to start. Also, I have been reading on and off a French book called 'Les Aristocrates', well-written, light and humorous  by Michel de Saint Pierre.
So Tuesday night, I read Compelled by Love and I got very emotional.  In the war-torn, poverty-stricken country of Mozambique, Heidi Baker and her husband have experienced God's miraculous provisions and witnessed the transformed hearts of people caught in desperate life-or-death situations.  (I quote) I could not stop reading and that evening as I still had to do marking and planning, I went to bed rather late!
So, what is your best read? Do you have any particular reading habits? Have an excellent white week-end!

1 John 4:10 This is love: not that we loved God, but that He loved us and sent his Son as an atoning sacrifice for our sins.
John 13:34 "A new command I give you: Love one another. As I have loved you, so you must love one another.

Being on holidays, I have indulged in my best hobby, catching up with some reading! So one evening, I had been reading 'Song of a stranger' (Keswick Ministries) and picked it up where I left it, chapter 6, The eternal presence, p 97, I quote: I don't know if you know much the growth of the church in China, but if you look at a graph of the growth of the church it is very level through the 20th c. and up until around 1970 and then graph takes off and goes through the roof. Over diner, I asked my hubby if he could guess why did this happen? In the conversation that followed, he mentioned the names of two Christian missionaries, Hudson Taylor and Gladys Aylward adding that they dressed like the people around her and this was a major factor in making their preaching effective. As I never heard of them, I read their biographies. Here is a short summary of Gladys' biography.
Born into a working class family in Edmonton, London on February 24, 1902, Gladys became a parlor maid at the age of only 14. Her call to missions came about when she attended a revival when she was 18 in which the preacher expounded on giving one's life over to the service of the Lord In her mid-twenties, she was given a probationary position with the China Inland Mission Center in London but  this endeavor didn't bear fruit. At the age of 26 her probation ended in failure. However, no one can frustrate the will of God."For the gifts and the calling of God are irrevocable. (Rom 11:29) At the age of 30, Gladys begins her missionary career in Yangcheng working with veteran missionary Jeannie Lawson. She helped operate an inn for mule drivers and she learned Chinese. After Jeannie's death, Gladys was unable to financially sustain the Inn. The local officials approached her and asked if she would be willing to be a "foot inspector." The tradition of binding Chinese women's feet had  been outlawed, but it was still being practiced in many places. Gladys began traveling around inspecting the bones in women's feet. As she traveled she would tell stories from the Bible and many looked forward to the days they could hear these strange new stories. During the war between Japan and China, Gladys also adopted war orphans and eventually had over 100 children in her care. In 1940, the war had escalated and she was forced to leave Northern China and head south to Sian through the thickening battle, over mountains and across the Yellow River. When Gladys climbed over the mountains to Sian, she had 100 children with her, that she was taking to a refugee area.  On the twelfth day, they arrived at the Yellow River, with no way to cross it. All boat traffic had stopped, and all civilian boats had been seized to keep them out of the hands of the Japanese. The children wanted to know, "Why don't we cross?" She said, "There are no boats." They said, "God can do anything. Ask Him to get us across." They all knelt and prayed. Then they sang. A Chinese officer with a patrol heard the singing and rode up. He heard their story and said, "I think I can get you a boat." They crossed, and after a few more difficulties Ai-weh-deh delivered her charges into competent hands at Sian, and then promptly collapsed with typhus fever and sank into delirium for several days. After 20 years in China, Gladys returned to England. She was embarrassed to find that she quickly became a celebrity. A book, movie and TV documentary were all made about her life. To many Gladys became known by many as "The Small Women," the title of her biography. She continued to travel and speak about her beloved China, returning to Taiwan in 1957.
What an admirable woman and an incredible story! In one of the websites, some comments are made by people who either heard her speak or knew her so I do recommend you to visit them! Blessings. N.

Posted by N Abram 5 comments: Links to this post