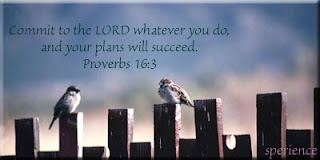 Commit your actions to the Lord, and your plans will succeed.

Do you have any plans or wishes in your life, then leave them to the Lord and trust in him. Indeed, it is a fantastic promise from our God!. Galal, the hebrew word means that you roll away your problems unto somebody who can help! Praise the Lord. Yours in Christ
Posted by N Abram No comments: Links to this post

Email ThisBlogThis!Share to TwitterShare to FacebookShare to Pinterest
Labels: promises, success, trust in the Lord 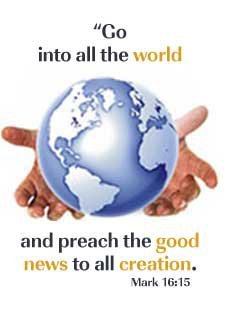 A minister told his congregation, "Next week I plan to preach about the sin of lying. To help you understand my sermon, I want you all to read Mark 17." The following Sunday, as he prepared to deliver his sermon, the minister asked for a show of hands. He wanted to know how many had read Mark 17. Every hand went up. The minister smiled and said, "Mark has only sixteen chapters. I will now proceed with my sermon on the sin of lying."
Posted by N Abram 2 comments: Links to this post

Email ThisBlogThis!Share to TwitterShare to FacebookShare to Pinterest
Labels: humour

The Lord is good and His love endures forever.
Psalm 100:5
Posted by N Abram No comments: Links to this post

The second coming of Jesus

Gospel, Matthew 25:1-13, the parable of the ten bridesmaids.
What is the context of the parable? Jesus talks to his disciples during the final week before his crucifixion, the cross is hours away. He has been questioned by people who tried to downgrade and ridicule him. He also has spoken firmly to challenge people. Last week, I watched a documentary on King Arthur, was it a great enlightening ? Who reads David Crockett, the Lone Ranger, Robin Hood. Take King Arthur! Was he from Yorkshire? or was he born in Cornwall? The documentary put him in Scotland. We don't know where he lived either! Part of the documentary says that Arthur is coming again to save the world and that we do not need to worry. Arthur lives in our hearts and minds. I thought that it sounded very familiar!
Take Jesus though! We know who Jesus was, the name of his followers. We know where he lived, Israel, we know how he died and that he rose again. Lots of things that he said have been written down not thousand years later but forty years after he resurrected, in AD 70, this is because the temple was destroyed that year and if it had happened, it would have been mentioned.
Lots of documents, the whole of New Testament, half of the Codex Sinaiticus tell us about him. Those Christians took the word of Jesus seriously and wrote everything down accurately. No other contemporary of Jesus is documented as well as him...
I cannot prove He is alive but I can taste and see that the Lord is good. (Psalm 34:8) He is doing things in our life and this is no sheer coincidence. Jesus says: I am coming again and in this parable of the Ten bridesmaids, his message is 'be ready!' The oil symbolizes the Holy Spirit. If God is with us, we cannot live and ignore his message. Jesus has paid the price for us and has given us a new life. ' I am the resurrection and the life' (John 11: 25) You will never die. Do you believe it? Christ is claiming his bride, the Church.  Jesus says some tough things.
For God so loved the world that he gave his one and only Son, that whoever believes in him shall not perish but have eternal life. John 3:16
S.A.
I took those notes last Sunday in Sandon church so I post them with some delay. Have a blessed week-end! Yours in Christ. N.
Posted by N Abram No comments: Links to this post 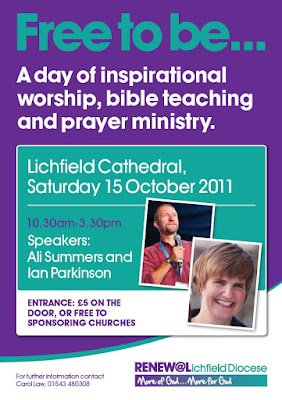 Either time is going too fast or I have being distracted too much. The reason is that I thought I'd posted the following notes but found it in the draft box! So here it is...nearly 3 weeks later..

Last Saturday, we went to the renewal day at Lichfield Cathedral. As always, it was excellent and inspirational (and do not think that I am on commission!) The worship was lead by the group Rumour and the music was great.

This time I thought that I would film part of it! As it happened,   I managed to film Ali Summers' presentation but unfortunately my battery ran out at the beginning of Ian Parkinson's speech. Both bible teachings referred to the theme of freedom to be us, children of God, set free by Jesus, and living to the full.
It was such a blessing to hear both speakers as what they were saying was uplifting, edifying and true to the Word of God.
Blessings, yours in Christ. N.
Posted by N Abram 2 comments: Links to this post 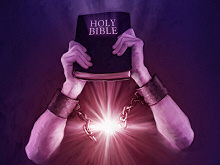 "I Ask God"
I ask God?
I ask ... well?
For rest with this weariness,
I ask God to take care of it,
I ask God to break the chains and bonds,
I ask God to touch my brothers,
I ask God to deliver them from Satan's clenches,
I ask God to hobble their heart and spirit,
I ask God in His Holy Spirit grace them,
I ask God unify, seal and armor their spirit in His right name.
AMEN.
written by Feon Davis
This poem touched my heart and my soul tonight. Sometimes, you do not know how to express what you are feeling, words do not seem to convey your heart's distress, images appear then move away fleetingly and you are left with a bitter taste. When I read this prayer, everything became much clearer. Our God has compassion and mercy on us and our brothers. Praise the Lord for his generosity and unfailing love!
Posted by N Abram 2 comments: Links to this post

Email ThisBlogThis!Share to TwitterShare to FacebookShare to Pinterest
Labels: God, grace of the Lord, prayers, The Holy Spirit 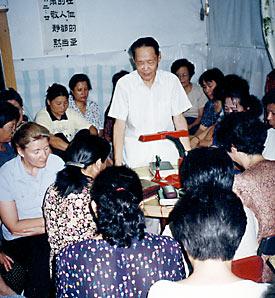 CHINA – Pastor released early after nearly seven years behind bars Prominent Chinese house church leader Pastor Zhang Rongliang has been freed from jail early – after almost seven years' detention.
Release has learnt that he was released from prison in Kaifeng on August 31 – nine months before his seven-and-a-half-year sentence was officially due to end. Pastor Zhang leads the Fangcheng Mother Church in central China's Henan province and also heads up one of China's largest house church networks, the China for Christ Church.
He was detained in December 2004 and convicted of 'obtaining a passport through cheating' and 'illegal border crossing' in July 2006. He had frequently attended mission conferences abroad.
Concerns over his poor health had prompted repeated international calls for his release. Pastor Zhang is said to have suffered several chronic diseases during his imprisonment, including diabetes – and had a stroke in 2007.
A house church leader of some 30 years' standing, Pastor Zhang had already served a total of 12 years in prison during five previous periods of detention. He spent seven years in the Xi Hua labour camp for the crime of 'counter-revolution under the guise of religion'.
Speaking of his most recent detention, Pastor Zhang has said that he was able to share the Gospel with many of his fellow inmates – including former high-ranking officials. He has returned to his home near Zhengzhou, provincial capital of Henan.
Meanwhile, China Aid President Bob Fu is currently in the UK for Release International, to talk about the situation for Christians in China following the recent clampdown on human rights lawyers. Bob will be the speaker at a Release meeting on Saturday in Birmingham – and at a prayer breakfast next Tuesday during the Labour Party conference in Liverpool. (For more details, visit www.releaseinternational.org (http://www.releaseinternational.org/) or ring 01689 823491.) Bob is a leading advocate on behalf of the persecuted church in China. Once a house church pastor, he was driven out of China due to persecution.