We were all babies once!

When I read this verse in Jeremiah I was in awe. This verse opened my eyes to our Father's deep love for all his children not just when they pop out but when they are tiny. It also meant that we cannot forget that the beginning of life is happening in a mother's womb and that at each step of its 'knitting' it's precious.
In Psalm 139 13-14 The Psalmist reminds us that each baby is wonderfully made. What do scientists make of those amazing verses? According to Dr. Alfred M. Bongiovanni, professor of obstetrics at the University of Pennsylvania, 'human life begins at the time of conception. I submit that human life is present throughout this entire sequence from conception to adulthood and that any interruption at any point throughout this time constitutes a termination of human life.”

Also Dr. Jerome LeJeune, genetics professor at the University of Descartes in Paris, states, “after fertilization has taken place a new human being has come into being.” He says this “is no longer a matter of taste or opinion. Each individual has a very neat beginning, at conception.”

Professor Micheline Matthews-Roth of Harvard University Medical School argues, “It is scientifically correct to say that an individual human life begins at conception.”

To conclude, I share these verses found in the Book of Job, ch 10 v 8:12 when Job is in utter adversity and rightly worried about his future!

“Your hands shaped me and made me.
Will you now turn and destroy me?
9
Remember that you molded me like clay.
Will you now turn me to dust again?
10
Did you not pour me out like milk
and curdle me like cheese,
11
clothe me with skin and flesh
and knit me together with bones and sinews?
12
You gave me life and showed me kindness,
and in your providence watched over my spirit.

The following information is very disturbing! Is this really going to happen!

A British ethics committee has greenlighted the use of human embryos for genetic research.

Dr Kathy Niakan of London’s Francis Crick Institute was given permission by the Human Fertilisation and Embryology Authority earlier this year to edit single genes, despite international criticism. Christian Concern’s Chief Executive, Andrea Williams, said at the time that the move had crossed a "dangerous ethical line".

The Cambridge Central Research Ethics Committee, the relevant regulator in this case, has now given Dr Niakan the go-ahead, making the UK the first country to approve gene editing and only the second to attempt it. China previously experimented on embryos but this was not approved by a regulator.

The new technique, known as Crispr-Cas9 (CRISPR), is thought to be able to edit single genes, by making the 'faulty' gene inactive or replacing it with a healthy copy. This would alter the DNA of an embryo.

Experiments, which will begin later this year, would take place on the human embryo within the first seven days of its life, and afterwards it would be destroyed. The embryos will be donated by women who have some left over, after undergoing IVF treatment.

The practice has not only been criticised for destroying human life, but there are also concerns about both the technique’s unknown consequences and the potential to create ‘designer babies’.

Dr David King, director of the Human Genetics Alert organisation, said earlier this year: "This is the first step in a well-mapped-out process which is leading to GM babies, and a future of consumer eugenics."

Scientists claim that CRISPR will be able to discover the reason for failed IVF and miscarriages.

"We would really like to understand the genes that are needed for an embryo to develop into a healthy baby," Dr Niakan claimed.

"Miscarriage and infertility are extremely common but they are not very well understood. We believe that this research could improve our understanding of the very earliest stages of human life."

"If we were to understand the genes, it could really help us improve infertility treatment and provide crucial insights into the causes of miscarriage."

Yet experts have warned that this claim is misleading. Earlier this year, Dr Peter Saunders of Christian Medical Fellowship said:

"The fact is that we already have quite a good understanding of what causes IVF failure and miscarriage and it has very little to do with anything that can fixed by Crispr-Cas9.

"Only abnormalities in single genes can be readily fixed with gene editing of the sort that the Crick Institute is proposing. Gene editing tools like Crispr-Cas9 do not fix chromosomal abnormalities".

Dr Trevor Stammers, Programme Director in Bioethics and Medical Law at St Mary's University, has also spoken about the many concerns surrounding gene editing and its approval in the UK.

Speaking on BBC Radio 4 in February, he outlined the moral problems with the destruction of human embryos and the dangers of introducing even restricted experimentation.

By gradually removing restrictions surrounding the technique, he explained, the practice will be "unstoppable", as scientists push to break further scientific boundaries.

"It is disappointing that an ethics committee should greenlight this kind of experimentation. The number of ethical considerations involved in gene editing has led many nations to warn against its use, yet here in the UK, scientists are ploughing ahead heedlessly. An ethics committee should aim to safeguard human lives at every stage, not condone their destruction for the purpose of experimentation."

Read more here
Posted by N Abram No comments: Links to this post

What is love then? 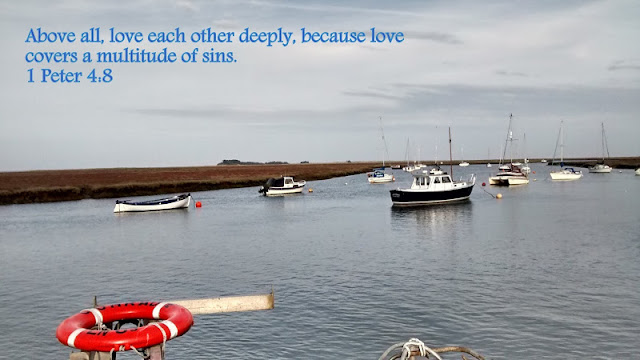 In Peter's epistle, we read: 'Above all, love each other deeply, because love covers a multitude of sins' (1 Peter 4:8)

Here is another verse that I like too.
If I speak in the tongues of men or of angels, but do not have love, I am only a resounding gong or a clanging cymbal.
1 Corinthians 13:1

And I mustn't forget this one:
7Beloved, let us love one another, because love comes from God. Everyone who loves has been born of God and knows God. 8Whoever does not love does not know God, because God is love.9This is how God’s love was revealed among us: God sent His one and only Son into the world, so that we might live through Him.…
1 John 4:8

What is love then? When we go at a wedding, we often hear those verses about love. You may have heard them before, you may not!

4Love is patient, love is kind. It does not envy, it does not boast, it is not proud. 5 It does not dishonor others, it is not self-seeking, it is not easily angered, it keeps no record of wrongs. 6 Love does not delight in evil but rejoices with the truth. 7 It always protects, always trusts, always hopes, always perseveres. 8 Love never fails.

Hope in the name of Jesus!

Even youths (teenagers) grow tired and weary, and young men stumble and fall;
but those who hope in the Lord will renew their strength.
They will soar on wings like eagles;
they will run and not grow weary,
they will walk and not be faint.

15 Aware of this, Jesus withdrew from that place. A large crowd followed him, and he healed all who were ill.
16 He warned them not to tell others about him.
17 This was to fulfill what was spoken through the prophet Isaiah:
18 “Here is my servant whom I have chosen,
the one I love, in whom I delight;
I will put my Spirit on him,
and he will proclaim justice to the nations.
19 He will not quarrel or cry out;
no one will hear his voice in the streets.
20 A bruised reed he will not break,
and a smoldering wick he will not snuff out,
till he has brought justice through to victory.
21 In his name the nations will put their hope.” 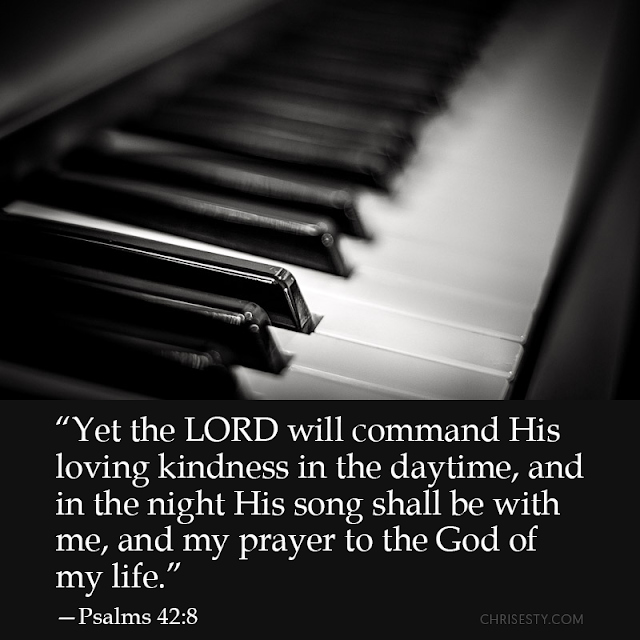 The English Standard Version says
Psalm 42:8
By day the Lord commands his steadfast love,
and at night his song is with me,
a prayer to the God of my life.