"It's a miracle," said rescue worker

French rescuers who found Darlene Etienne, 17, said it was a miracle that she had survived for more than two weeks trapped in the debris. Miss Etienne's family said she had been studying at the College of St Gerard when the powerful earthquake struck on Jan 12. "We thought she was dead," Jocelyn A. St. Jules, her cousin, said. Her discovery comes five days after the Haitian government officially announced the end of search and rescue operations."I don't know how she happened to resist that long. J.P. Malaganne. Rescuers said she was shocked and dehydrated but happy to be free. 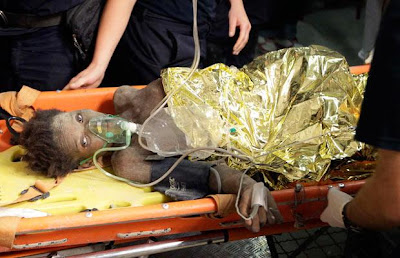 "She just said 'thank you,' she's very weak, which suggests that she's been there for 15 days," Commander Samuel Bernes of the rescue team said. "She was in a pocket surrounded by concrete." Mr Bernes said that neighbours had been searching in the rubble of their home in the central Carrefour-Feuilles district when they heard a voice and alerted rescue teams. The girl was trapped between a collapsed wall and a door and was able to lie down, rescuers said.Miss Etienne, who has an injury to her leg, was given oxygen and taken to a French-run field hospital for treatment.
More than 130 people have been unearthed since the earthquake, but most of those were in the immediate aftermath of the disaster and authorities have said it is unlikely for anyone to survive more than 72 hours without water. But the stories of survival against the odds in Haiti continue. Earlier this week a man whose house collapsed during one of the strong aftershocks to hit the city was rescued after 12 days trapped in the rubble. 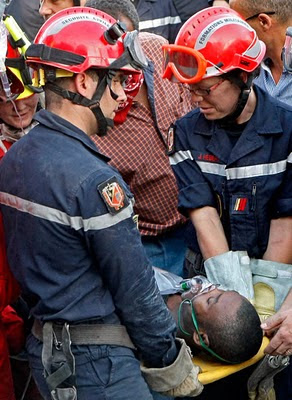 Wismond Exantus, 25, was saved from the wreckage of the shop where he worked in Port-au-Prince on 23 January, after surviving 11 days by drinking Coca-Cola and eating snacks...He spent the 11 days buried in the ruins of the grocery store praying, reciting psalms and sleeping, he said. "I wasn't afraid because I knew they were searching and would come for me"
Let's hope that there will be more survivors in the near future. During the week I only listen to the news going to work and coming back home, on radio 3 and 4 and somehow did not realise that there'd been some survivors so I was so moved and pleased to hear that there'd been more. I do not believe in luck but I believe firmly in the power of God.  Let's praise the Lord for these lives. Let's commit in his hands the Haiti people, the UN and every rescue worker involved in restoring the country. In Jesus' name.
More details on the following website http://www.telegraph.co.uk/news/picturegalleries/worldnews/
Posted by N Abram 3 comments: Links to this post

Trust in the Lord always.

Trust in the Lord

Somehow, what's happened in Haiti is in the back of my mind. The shock, the suffering, the anguish, the despair are visible on the photos and films. The devastation caused by a 60 seconds tremor is huge. If you are alive, you will thank the Lord and start fighting to help others. I do not question why the Lord has let this earthquake happened as I trust in Him.

All I want to do is pray and keep on praying for the people of Haiti and the rescue workers there. After a week, they found two women, one 25 y.o. Hotteline Lozama and the other one, Anna Zizi, 69 y.o. in the rubble of Port-au-Prince cathedral. Her son declared: I never give up hope, no. We were praying a lot for this to happen. Also, an eight-year-old boy and his sister have been pulled alive from the rubble by US rescue teams. The young boy named Kiki emerged from the rubble with a grin and arms outstretched. He was rescued along with his 10-year-old sister by two American teams.

Father Lord, comfort those who have lost loved ones, that they may know and feel your presence with them. Carry them through the difficult days to come. Help the rescuers to find those who may yet be rescued. May your Holy Spirit give strength, hope and perseverance to every person working to find survivors and to those who look after the injured.

How can we help Haiti's people ?

Tearfund have dispatched emergency funds to help survivors of the devastating earthquake that has hit Haiti, including the densely populated capital Port-Au-Prince and the surrounding area. Haiti is the poorest country in the western hemisphere and millions of people live in the affected area. Many buildings have been destroyed or badly damaged in the capital Port-au-Prince, including the presidential palace and the five-storey UN offices.  Looking at the pictures on the news is so upsetting. Today, the papers were reporting that armed gangs were louting in town.
EAUK's member organisations are responding swiftly to this disaster
They include….
Tearfund which has dispatched emergency funds and a response team
Samaritan's Purse which is sending a disaster assistance team and mobilising resources
World Vision which has 370 staff in country and is providing immediate relief for victims
World Emergency Relief which is providing emergency supplies
Compassion has mobilised its Disaster Relief Fund
WorldShare are channelling funds through their partners working in Haiti on the ground                           Mission Aviation Fellowship have three aircraft based on west coast of Haiti. Medical supplies are being flown in.
Please consider whether you can support or donate to these efforts. Each of the above have an appeal or you can donate to The Disasters Emergency Committee.
As Evangelical Alliance member organisations respond to the earthquake in Haiti, the Alliance is calling on Christians to pray for the survivors and the relief efforts.
The earthquake, which measured 7.0 on the Richter scale, struck on January 12. Relief and development agencies, including Alliance members, responded immediately, deploying staff and creating emergency appeals. Magalie Boyer from World Vision, who have 370 staff in the country, spoke of the earthquake: "It felt as if a truck had hit a wall. There is extensive damage in the city. People had to spend the night in the streets. They are not comfortable staying in their houses." Boyer added: "World Vision Haiti will distribute first aid kits to survivors, along with basic materials such as soap, blankets, clothes and bottles of water as an initial response."
Posted by N Abram 1 comment: Links to this post

Winter in the Midlands.. 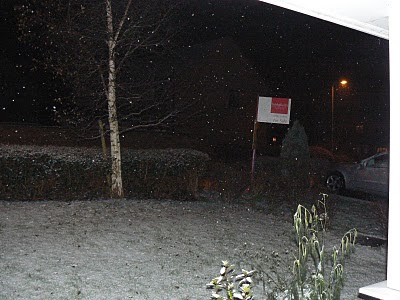 This is it, the snow is melting..it is slush everywhere. In a way, I am pleased as it means that I wont spend 10 minutes trying to clear my windscreen! 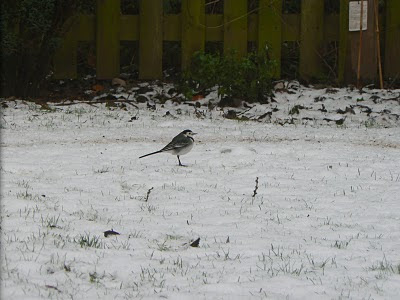 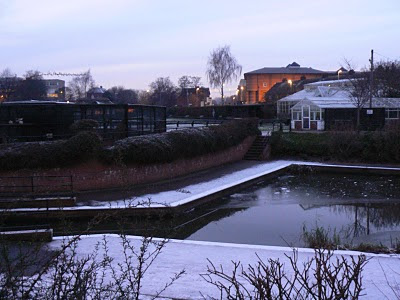 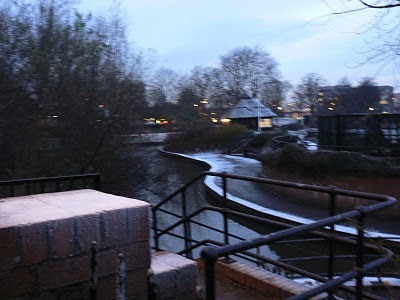 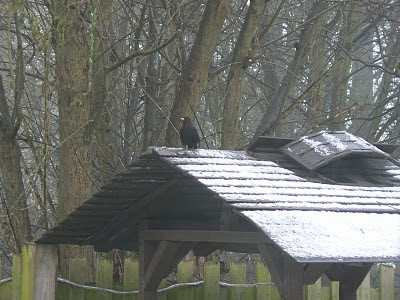 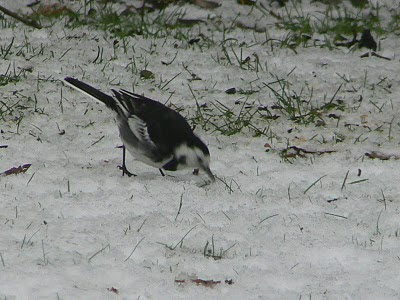 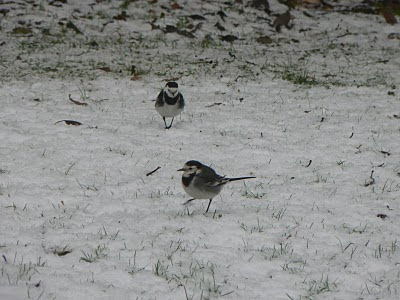 Aren't those wagtails brave, trying to feed in spite of the snow.. We haven't managed to walk by the canal yet so these are backgardent shots..I shall go back to more planning now!
Have a blessed evening.
Posted by N Abram 3 comments: Links to this post

Email ThisBlogThis!Share to TwitterShare to FacebookShare to Pinterest
Labels: creation

Want to know more about christianity?

How much of an optimist are you?

As it is the beginning of a New Year, we cannot help thinking about new beginnings. Most people will even go far as taking new resolutions and endeavour to hold them. I am not sure what is the most popular resolution now : spending less, losing weight, travelling more, making more friends, finding a wife or a husband, making more money, sticking to one's job. Some of us may be more pessimist, say, realist and not bother as they think they will fail them quickly.
As a Christian who believe in the Good News that Jesus was raised from the dead and is alive, I should always be an optimist. What about you? Do you always live in the joy of our Lord’s resurrection? Do you always reflect that in your daily lives? Well, if i answer this question truthfully, i admit that I've had my moments of pessimistic weakness. This afternoon, as I was reading 2 Timothy 1 6-7, Paul reminds us ' to fan into flame the gift of God'..further down, he encourages us even more : , Jesus-Christ who has detroyed death and has brought immortality and life through the gospel.. Paul'se exhortation is extremely clear.
The minute we have become Christians and put our trust in Jesus, then we should be optimist, and with all what it entails, happiness, joy.. in Christ we are promised the best possible outcome. In John 14:2 Jesus tells us : I am going there (my father's house) to prepare a place for you.
If you are not a Christian, the Good News if  for you too. .. God our Savior, .. wants all men to be saved and to come to a knowledge of the truth. 1 Timothy 2:3-5.
Posted by N Abram No comments: Links to this post

gomakedisciples: Jews do come to faith in Jesus...

Messiah declared he was Y'shua.
In Luke 4:16-21 Jesus said: The Spirit of the Lord is upon Me, because He annointed Me to preach the gospel (besorah) to the poor...
I have found another excellent site called jewishgentilecouples.com

It is worth having a look.
Have a blessed day!
Posted by N Abram No comments: Links to this post