Are you stressed or fed up? 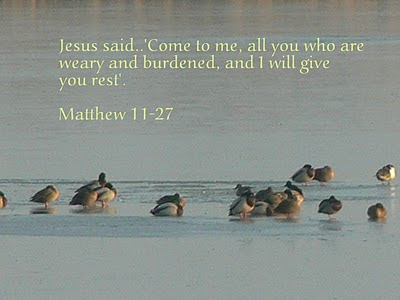 Tonight, Mandy and I went out knocking on doors inviting people to our breakfast service tomorrow at 9:00. We met somebody keen to engage into a conversation about the Gospel and the identity of Jesus even though she claimed to reject the existence of God or Jesus. After hearing us, she would still say we were talking 'rubbish'!  Still, we kept on.
Alleluia! Jesus lives.
I thought that I would give reasons for believing in Jesus' existence?
Jesus is mentioned by early historians who were not Christians.

1. Flavius  Josephus - a Pharisee and Jewish historian
Flavious Josephus said; "About this time there lived Jesus, a wise man, if indeed one ought to call him a man. For he was one who wrought surprising feats and was a teacher of such people as accept the truth gladly. He won over many Jews and many of the Greeks. He was the Messiah. When Pilate, upon hearing him accused by men of the highest standing amongst us, had condemned him to be crucified, those who had in the first place come to love him did not give up their affection for him. On the third day he appeared to them restored to life, for the prophets of God had prophesied these and countless other marvelous things about him. And the tribe of the Christians, so called after him, has still to this day not disappeared." Antiquities of the Jews 18:63-64

2. Tacitus - A Roman Historian
In A.D. 115, Tacitus, the most important Roman historian of the first century, wrote as follows:
"Nero fastened the guilt and inflicted the most exquisite tortures on a class hated for their abominations, called Christians by the populace. Christus, from whom the name had its origin, suffered the extreme penalty during the reign of Tiberias at the hands of one of our procurators, Pontius Pilate, and a most mischievous superstition, thus checked for the moment, again broke out not only in Judaea, the first source of the evil, but even in Rome ... Accordingly, an arrest was first made of all who pleaded guilty: then, upon their information, an immense multitude was convicted, not so much of the crime of firing the city, as of hatred against mankind" (Tacitus, Annals 15.44)
It is clear from this passage that Tacitus was no friend of the Christians.

3. Pliny the Younger, governor of Bithynia,  wrote as follows to the Emporer Trajan around 111 A.D.
"I have asked them if they are Christians, and if they admit it, I repeat the question a second and third time, with a warning of the punishment awaiting them. If they persist, I order them to be led away for execution; for whatever the nature of their admission, I am convinced that their stubborness and unshakable obstinacy ought not to go unpunished...
They also declared that the sum total of their guilt or error amounted to no more than this: that they met regularly before dawn on a fixed day to chant verses alternately amongst themselves in honor of Christ as if  to a god, and also to bind themselves by oath, not for any criminal purpose, but to abstain from theft, robbery, and adultery ...         - Pliny the Younger, Letters 10.96
4 Suetonius  Suetonius was a Roman historian and a court official in Emperor Hadrian’s government. In his Life of Claudius he refers to Claudius expelling Jews from Rome on account of their activities on behalf of a man Suetonius calls Chrestus [another misspelling of Christus or Christ].
If you are interested in finding more, why don't you visit those websites: http://www.sowhataboutjesus.com/existed.php
http://www.christian-faith.com/html/page/did_jesus_exist
http://www.riversoflife.co.uk/oldsite/Apologetics/Resurrection/crucifiction.htm
Blessings. Yours in Christ
Posted by N Abram 1 comment: Links to this post


I have just discovered that song tonight. Blessings in Christ.
Posted by N Abram 1 comment: Links to this post