It is well worth it. On their home page, this is their introduction:
Two thousand years after he walked the earth, Jesus of Nazareth remains one of those most talked-about and influential people who has ever lived. In the pages that follow, we explore his life, character, teachings and followers.
We look at how he has been quoted, misquoted, filmed, reported on, worshipped and argued over. Please feel welcome to click, explore and post your questions, thoughts and prayers.

Content on rejesus is arranged in four main areas:
Story contains modules about Jesus’ life, downloads and a pub quiz to test your knowledge.
Lives looks at Jesus’ famous followers from ancient saints to modern day heroes.
Spirituality has modules that aim to help you discover more about prayer and the inner life.
Creativity contains modules that show how Jesus has been interpreted and explored. 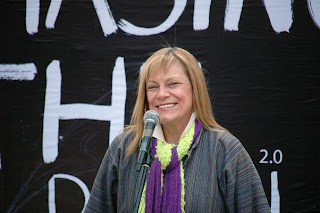 In the Lives section, I found out who was Jackie Pullinger. At 22, Jackie Pullinger wanted to become a missionary, but no society would take her on. So she went on her own to Hong Kong and began a pioneering work among drug addicts and Triad gang members that continues today. As a young girl at Sunday School she decided she wanted to be a missionary - and that was before she really knew what a missionary was. But as she grew up, she forgot about her childhood ambition for a while and became a student at the Royal College of Music.
It was only when she started meeting regularly with other Christians in a friend’s home that she thought about being a missionary again. Then one night, she had a dream.
“I saw a vision of a woman holding her arms out beseechingly as on a refugee poster. I wondered what she wanted - she looked desperate for something… Then words moved past like a television credit: WHAT CAN YOU GIVE US?”
After a series of dreams and vivid experiences, Jackie decided she would go to Hong Kong. The trouble was, no one else agreed with her.
She applied to every missionary group she could think of, and also to church organisations and the Hong Kong government - but all the doors closed in her face. You’re too young, you’re too inexperienced, you have the wrong qualifications, she was told.
She was about to give up, when the vicar of a church she helped in told her, against the received wisdom of everything else she had heard, to go to Hong Kong anyway. Want to read more, click on the link http://www.rejesus.co.uk/site/module/jackie_pullinger/P2/
or go on Jackie Pullinger's website, http://www.ststephenssociety.com/ at the moment you will have to click on Enter Flash version as the html is under construction..
In the Creativity section, I chose to go on 'Jesus and hope', an interactive exploration. I quote the explanation given by their maker:
This ideosyncratic exploration is full of deeper meaning and reflections on what the Bible has to say about Jesus and hope – it’s best approached slowly with an open mind. Produced by Bruce Stanley.
I thought that it was brilliant, deep and fun at the same time.
In the Spirituality section, I found a Happiness e-course. Wow!
This course takes the wisdom and simplicity of Jesus and combines it with the latest interventions from the world of positive psychology to help you find happiness and meaning in your life. Follow this free 8 week happiness course, complete the exercises and see what occurs for you.
Lord, thank you for our brothers and sisters who decide to leave everything they have to bring the Good News of your Salvation in dangerous zones, they have no fear because they believe in You, they persevere even when everybody says no go, they listen to you Jesus, instead of choosing an easy way out. May you pour out abundant blessings on them, their family and team and give us the same boldness of mind, us who live in a comfi setting in the West. Amen.

Posted by N Abram 4 comments: Links to this post

Email ThisBlogThis!Share to TwitterShare to FacebookShare to Pinterest
Labels: mission

Have you heard of this organisation Gospel for Asia. Tonight, I thought i'd share an article of their newsletter and the following video shows one of their missionaries in action in a slum there. Please click on the arrow to start the film!

Here is the article:

A personal message from Gospel for Asia President K.P. Yohannan

The photo was shocking. There, on the front page of the Indian Express, my eyes were drawn to a picture of a small boy—he couldn’t have been more than five years old—lying on a sidewalk next to the busiest street in Mumbai (Bombay), India.

This nearly-naked boy was lying next to a dog—a female dog. And as I looked closer I could see that this little skinny, ragged child was drinking the dog’s milk!
My eyes moved from the photo to the caption below it, which read, "This dog is his mother."
Horrified, I began to read the article that accompanied the photo, and it laid out the grim reality that was so vividly portrayed in that picture. It talked about the 100,000 kids walking the streets of Mumbai—a city of nearly 15 million people. These kids will never know their parents. The article also talked about the government trucks that come around in the early dawn hours to haul off the bodies of those people—mostly the children—who died during the night.
As I read this article, my heart was breaking, because I knew that these homeless children were but a fraction of those who make up the horrifying human equation in India. Mumbai also has the unfortunate distinction of having one of the world’s largest slums. With five million residents, there are as many people living in makeshift shacks in the Mumbai slum as there are living in Chicago and Houston combined!
And I know that this overwhelming problem isn’t exclusive to Mumbai. In South Asia alone, more than 90 million children go to bed hungry every single day; another 134 million children between the ages of seven and 18 have never been to school. India alone has as many as 150 million child laborers, the largest number of any country in the world! That amounts to one in seven children over the age of five forced into child labor in India. Just think about these children working 12 to 18 hours a day for only a few pennies. No wonder this little boy I saw in that newspaper picture was taking comfort in a mama dog. It may have been the only time he felt that someone truly cared for him. Find out what you can do to help a child in South Asia
Here is their link :
http://www.gfa.org/slum-dog-boy
Posted by N Abram 1 comment: Links to this post